"Your Source for Harlan Genetics on the Northern Plains"

Some of the horses we have raised and what they have gone on to do for their new owners.

We sold John Wayne to Ray Kinghorn of St. Onge, SD and he went on to make him into an all around ranch horse and introduced him to heeling. John Wayne has since gone on to compete at the College Finals in heeling.

Ray has bought a number of horses from us over the years. They are ridden for everything that needs to be done on the ranch.

John Wayne as a 3 year old.

Dollar getting ready for first ride.

Tim and Jodie Schell from Capitol, MT purchased a nice group of colts from us for their ranch including "Dollar."

Congratulations to Tee Cross on winning Wyoming State Champion Header on Nifty Blue Lass better known as "Lumpy". Tee purchased "Lumpy" as a yearling from us and has gone on to make her into an outstanding rodeo and ranch horse.

Congratulations to Tack Cross on winning Sheridan All Around Youth on "Lumpy". Good thing he has a sister and a good horse to hold all of his winnings! 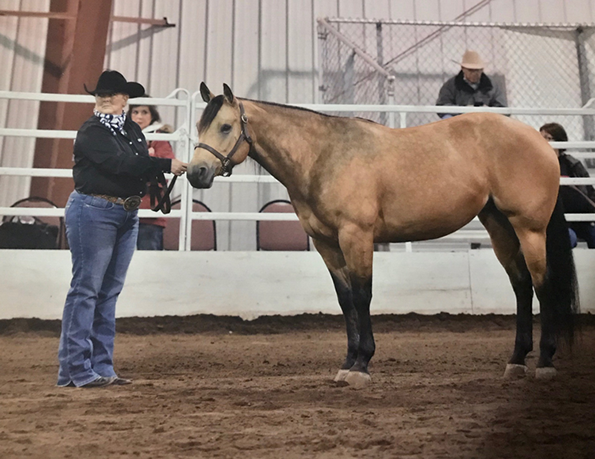 This mare was bred by good friends of ours - Glen & Janet Long. She sold at the RQHBA sale in 2010. We asked Julie Wiser, her current owner about her accomplishments and this is what we recieved in response.

I let a youth girl who is legally blind show her in youth Halter.  I should be really close to some ROM’s in some riding classes this year.  2017 Missouri Highpoint in Amateur Boxing and Amateur Mare Halter. Missouri 2017 AQHA VRH Highpoint Open Halter and 2nd in Trail.  AQHA World Qualifier in Open Ranch Riding for 2015, 2016, and 2017.  AQHA ROM Open Ranch Riding.

We are headed to the NSBA World Show in Tulsa in August, the American Royal in Kansas City the first part of September and to Topeka, Kansas at the end of September.  I feel like I have over loaded you with information, but you know how people are when they talk about their kids. I have truly enjoyed this Mare."

Purchased as a weanling through the Billings Sale in fall of 2018 by Charity Green of Montana. She had this to say in a recent e-mail, "Just wanted to send you an updated pic of Dakota! Thank you so much for a really nice filly! "  We can't wait to hear how she does when she is started next year.

Vance Moore and his father Mickey Moore have been out from Illinois several times to pick out some top colts and fillies. Here is Top Harlan Booger, purchased as a weanling in the fall of 2019 picture taken in the spring of 2020, can't wait to see what he is going to look like all grown up.

Alan VanBochove from Rapid City, SD bought this horse at the RQHBA sale as a three year old with 30 days with Becky Amio. This is what he had to say in November 2020.

"We are having a lot of fun and he is one of the best horses we have owned. We have brought home several paychecks and a couple of nice buckles.  In addition to roping we also do a fair amount of trail riding. I’ve been to several branding‘s. He has no problem dragging the biggest calves out of the pen. Strong horse! This past year he’s really starting to get quiet and solid."